Skip to Main Content
It looks like you're using Internet Explorer 11 or older. This website works best with modern browsers such as the latest versions of Chrome, Firefox, Safari, and Edge. If you continue with this browser, you may see unexpected results.
Library Home
Resources
Services
New!
Contact Us
Tutoring

Among the most notorious fake news stories of 2016 was one alleging that Hillary Clinton was running a child-prostitution ring out of a Washington, D.C., pizzeria. This had real-world consequences for the employees of that pizzeria when an armed man decided to "self-investigate" the rumors, as described in "Dissecting the #PizzaGate Conspiracy Theories," by Gregor Aisch, Jon Huang, and Cecilia Kang.

Not all fake news is geared toward a conservative audience; liberals may be just as quick to believe falsehoods that seem to confirm their hopes and fears. A February 2017 story run by Alternative Media Syndicate claimed that police forces arrayed against the pipeline protesters at the Standing Rock Indian Reservation raided and burned a protester camp, offering graphic imagery of flaming tipis as proof. This story is completely false; the image was taken from a 2007 HBO film, Bury My Heart At Wounded Knee. Snopes.com debunks the story here.

In February 2018, after surviving a shooting in which 17 of her schoolmates died, Florida teenager Emma Gonzalez became an outspoken proponent of gun control legislation. Not long after, imagery of her apparently tearing up a copy of the U.S. constitution went viral on right-wing websites. This imagery was doctored; the originals came from a Teen Vogue photo shoot in which Gonzalez symbolically tore up a target sign. Photo manipulation is a time-honored propaganda tactic, but is now easier than ever thanks to Photoshop and other editing tools.

A tactic that complicates the fake news issue even further is the creation of "deep fakes." This is the use of motion capture and emerging video technology to create very realistic simulations of real people saying or doing bogus things. Deep fakes can be virtually impossible to spot by sight alone.

Fake news sites intended as satirical amusement have been around for a while. The Onion is a well-known example. Its stories have sometimes been cited or recycled as serious news, however, as in the 2012 case of a conservative congressman who posted a story about an $8-billion Planned Parenthood "Abortionplex" on his Facebook page.

The Onion's Latin motto, "Tu stultus es," simply translates to "You are stupid." 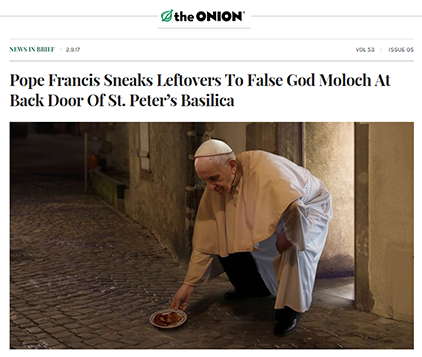 Fake news does not represent new ideas, merely new methods. It is closely related to the much older practices of propaganda, yellow journalism, and tabloid journalism. What all these practices have in common is that they distort fact, or deal in outright falsehoods, to achieve an emotional effect, rather than to inform or educate. The motives behind them may range considerably, though. These phenomena fall under the blanket term of "disinformation."

There are abundant examples of propaganda use throughout history. Below are a few examples: 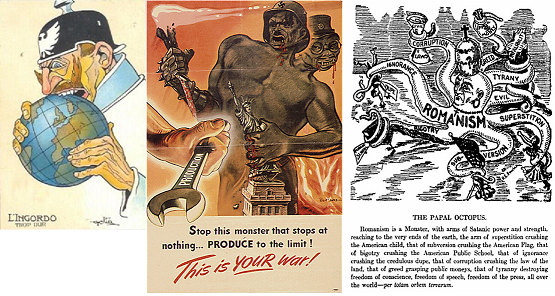 Yellow journalism is a term used to refer to unethical, sensationalistic reporting. Historically, it has most often been applied to the practices of William Randolph Hearst's and (ironically, given that his name has become synonymous with excellence in journalism) Joseph Pulitzer's competing New York-based newspaper empires in the 1890s, especially leading up to the 1898 Spanish-American War (S. Kobre, "The Yellow Press and Gilded Age Journalism," 1964).

Tabloid journalism is a term more familiar to most Americans. It is similar to yellow journalism; perhaps the main difference is that it is less likely to focus on major news stories and more likely to feature headlines on celebrity gossip and purported bizarre occurrences. A prominent (if extreme) example is The National Enquirer: 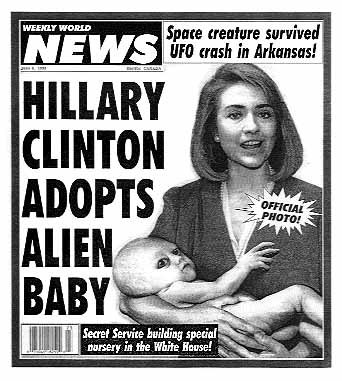 Fake News in Mainstream Media: The Story of Stephen Glass

Traditional news sources do report highly inaccurate or even wholly false stories on occasion. Stephen Glass was an up-and-coming journalist with The New Republic, a well-established liberal magazine, who fabricated dozens of stories in the mid-1990s. Despite going to some length to cover his tracks, including creating a bogus (but rudimentary) website for a fictional software company in one of his stories and recruiting his brother to impersonate a source, he was eventually exposed and fired after an investigation by a suspicious rival publication, Forbes, and Glass' own editor, Chuck Lane.

Buzz Bissinger of Vanity Fair wrote about this episode in a 1998 article, "Shattered Glass," which became the basis of a 2003 film starring Hayden Christensen in the title role. Glass operated in an era when searching for information on the Web was perhaps not as fluid as it is today, but his story remains an important reminder that information (especially of the sensational, crowd-pleasing variety) that cannot be verified or corroborated using other sources should be treated with skepticism.